Special at the Grandstand

Pictured is Edward Lambert of Ashville during his initial combat training for the US Army. Mr. Lambert was a truck driver for the 377th Transportation Unit. (Photo courtesy of St. Clair County Public Relations Representative Gary Hanner)

According to Curtis Pippin, St. Clair County Veterans Outreach Coordinator, Edward Lambert contacted him for help with some VA benefits. Lambert served in the U.S. Army and was a truck driver for the 377th Transportation Unit.

“I sat down with him and did a needs analysis,” Pippin said. “During our conversation, he told me he needed this help because he was struggling to keep his house together.”

Pippin went to Lambert to see if there was, in fact, anything they could do for him.

“Once I got there, I realized it had no central heating or air,” Pippin said. “He lives in difficult conditions, and I knew immediately that we had to work with the community to try to solve this problem, especially since it was winter and it was so cold.

Pippin said in recent weeks it has formed a partnership with Home Depot and Pell City Heating & Cooling.

Pippin also noted that Tim Hendrix with The Brook Besor in Pell City is the person who involved Kevin Flournoy with Pell City Heating and Cooling in the project.

“It was definitely a community effort that allowed us to provide Mr. Lambert with a two-and-a-half-ton HVAC unit and a new 40-gallon water heater,” Pippin said. “Everything was installed free of charge by Pell City Heating & Air. Home Depot donated the water heater. It’s just a great feeling. Mr. Lambert served with the 377th Transportation Company. He is not in very good health and lives there with his wife. It’s just great to see the community come together and help a veteran who was in need. 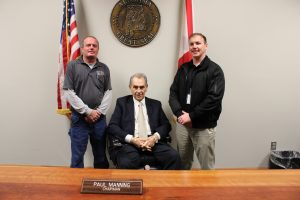 Kevin Flournoy is an employee of Pell City Heating & Cooling. After discovering that Mr. Lambert needed to replace his heating and air conditioning unit, Flournoy and others at the Pell City company wasted no time asking him for help.

“We replaced his water heater and central heating and air conditioning unit,” Flournoy said. “Everything was free for Mr. Lambert. It’s great to be able to give back to the community. The community has done so much for us, and this is our way of giving back to those in need in the community.

“Curtis is a great guy and a great guy for this job of helping our veterans,” Manning said. “We are so proud to have this outreach veteran outreach program here in St. Clair County. We are only one of two counties in Alabama to offer a program like this. The Home Depot and Pell City Heating & Cooling are doing great things for the citizens of St. Clair County.

Often I reflect on how lucky I was when I grew up. This luck continued into my college years. Missing a draft call in his senior years, I decided to hit the books instead of training camp. Tuition fees were a little different 50 years ago. I recently spoke to an acquaintance who got her […]

India oi-Madhuri Adnal | Posted: Thursday June 2nd 2022, 05:41 PM [IST] New Delhi, June 02: An official team from India is visiting Kabul to oversee operations for delivering humanitarian aid to Afghanistan. During the visit, the team will meet representatives of international organizations involved in the distribution of humanitarian aid. Also, the team is […]

European Commission President Ursula von der Leyen speaks during a press release at EU headquarters in Brussels, Belgium, February 27. (Stephanie Lecocq/AP) Russia faces universal condemnation and increased sanctions from European countries for its unprovoked assault on Ukraine, and new measures are being announced every day. If you have just read today, here is an […]