Eurocontrol aviation experts expect air traffic to increase significantly in the coming months, predicting an 84% recovery to pre-Covid-19 2019 levels by the end of the year , or around 9.3 million flights across Europe for the whole of 2022.

Specifically, according to Eurocontrol’s baseline scenario for the April-December period, steady growth is expected between April and the summer peak, reaching 89% of 2019 levels in August and reaching 92% by the end. of the year.

This sustained recovery will result in around 9.3 million flights operated across Europe for the whole of 2022. This represents 84% ​​of traffic from 2019, when the network recorded a record 11.1 million flights and a significant increase from the 6.2 million flights recorded in 2021.

“Aviation has continued to recover well over the past few weeks and there has been a steady increase from 68% in January to 79% in early April over 2019 levels, even taking into account the impact on the network and fuel prices of Russia’s unprovoked aggression against Ukraine,” said Eamonn Brennan, Director General of Eurocontrol.

Brennan went on to add that airlines were adding capacity and some were already surpassing their pre-Covid levels while at the same time people were excited to fly.

Eurocontrol expects 90% or more of 2019 traffic during peak summer periods and some holiday destinations to exceed 100% of their 2019 levels.

However, on the downside, Brennan also discussed the risks associated with lingering geopolitical tensions that could further impact fuel prices and economic conditions as well as the possibility of new Covid variants.

“We are also seeing staff shortages in some parts of the industry, particularly at airports in key roles such as airport controllers or ground handlers, and this needs to be managed carefully. If any of these factors come into play, traffic could slide to the levels envisioned in our low scenario. 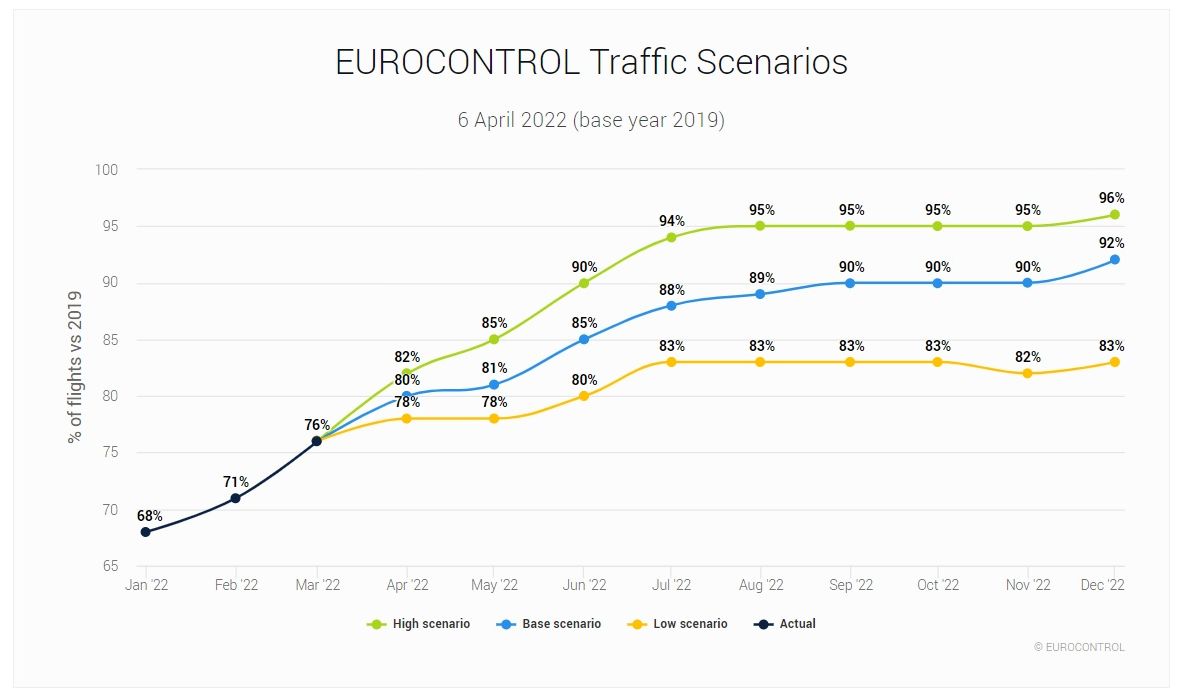 According to Eurocontrol’s baseline scenario, traffic is expected to return to around 90% of 2019 levels by summer 2022 and remain stable until the end of the year, with most intra-European flows returning to normal, even exceeding pre-pandemic levels, and in the long term. transport flows are gradually returning.

Last year, a Eurocontrol report predicted that air traffic to Greece could likely return to pre-2019 pandemic levels in 2023 given that Covid-19 is under control, with the country even surpassing 2019 levels by 2024.

To follow GTP headlines on Google News to keep up to date with all the latest news on tourism and travel in Greece.

Report on the Air Traffic Control Equipment Market at just $ 2,000 for today with delivery of information throughout the year on a quarterly basis as well as free consultation throughout the year . We are offering year-end discount which is first introduced to the market in the “Air Traffic Control Equipment Market” report. Make […]

New Jersey, United States, – The Air Traffic Management Market is expected to increase at a stable CAGR in the coming years, says the latest Verified Market ResearchÂ® report. The publication offers an insightful overview of historical market data and the milestones it has passed. The report also includes an assessment of current market trends […]